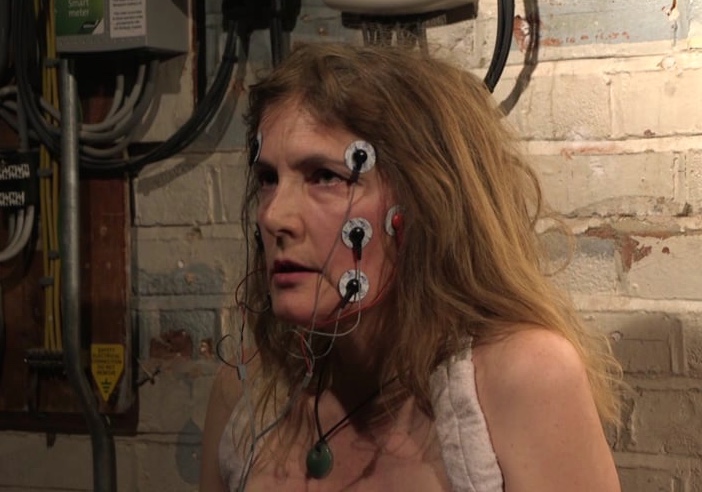 Deej Fabyc works with performance, installation, photography and video. Their work has for many years addressed the psychological dimensions of the personal and political experience of trauma. Current performance work is engaged with wicked embodied mapping of narratives of awkwardness, neurodiversity, ageing, loss, mental health and chronic illness. Fabyc has performed in museums, night clubs, and the street internationally since the 1980s.

Recent performances have occurred in ‘How do I look’ with GraceGraceGrace at Guest Projects London, Theatres of Contagion Conference at Birkbeck London, and Collaborations with Annie Sprinkle  and Beth Stephens in Documenta both in Athens and Kassel. Deej has held a one year residency bursary at Artsadmin, London and has completed residencies at Dartington School of Art, Devon, the Cite Internationale des Arts, Paris, and Rules and Regs, at A Space Gallery, Southampton. Significant performances include Details at L’abracada Festival International d’Art Contemporani, Castell de la Bisbal, Spain 2006; And She Watched, Trace Installation Artspace, Cardiff, 2005 and Kingsgate Gallery, London 2004; and in Don’t Call it Performance, Centro de Arte Reina Sofía, Madrid and Centro Parraga, Murcia, Spain, 2003.

Fabyc has taught performance/fine art in the HE sector, the prison system and community settings for the past 20 years and currently lives in Tipperary Ireland whilst lecturing at the School of Art, Architecture & Design, London Metropolitan University.

Deej has a highly collaborative practice and has been a founding member of several collaborative projects including the underground feminist art collective JILLPOSTERS in Melbourne in the 1980s, and Elastic ARI Sydney 2000-2001 Elastic Residence, a London ARI 2004-11 of KISSS, an international curatorium of artists working with issues of surveillance. Since 2018 Deej has been Chair of FBI, a feminist network of artists. They are the Executive director of Live Art Ireland – Elain Bheo Centre for Art Research and Development at Milford House.
Deej Fabyc is Australian, but was born in London, spending their early childhood in England and Ireland before travelling to Australia aboard the P&O Arcadia to start secondary school. They completed their BFA at Southern Cross University and gained an MFA from the University of New South Wales Art and Design school. They are currently based in Ireland